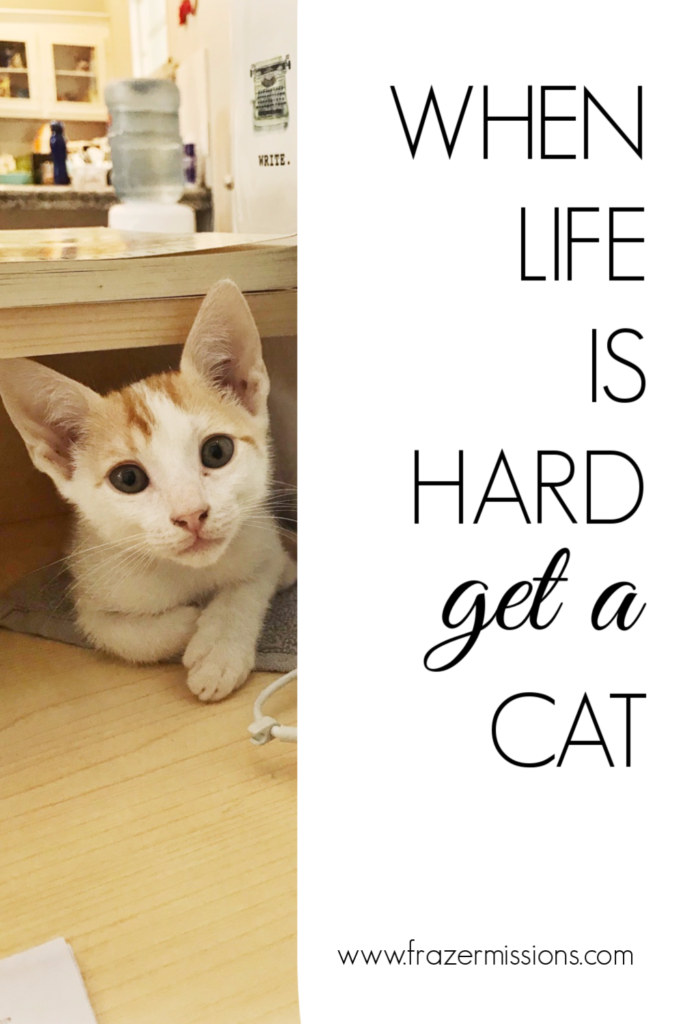 Jason and I have this saying we borrowed from a writing workshop I attended one time. A memoir author was talking about plotting out your story and she used this sentence:

Life is hard, very hard, but it gets better when you get a cat.

Our heart has been a little homesick recently (read my post here about that). So we decided to get a cat. Specifically we were looking for a kitten. Turns out the process is a little more complicated in a third-world country. I hope to be able to tell the story of how we ended up with this adorable fur-ball and remind you that although life is different and sometimes hard, we find it such a joy to serve the Lord in this crazy country!

Let me give you a little context. First, we had been talking about getting a cat before even moving to Honduras. Last summer we had to give away our very well loved and amazing black and white cat as we prepared to move. Taking our cat with us wasn’t an option because of high costs. The children were so sad to say goodby to her, so we promised once we got settled in Honduras we would find another cat.

The first few weeks we were here I would keep eye out for animals for sell. One day I noticed some cages along the side of the road as we drove into town. Inside were dogs and peacocks (yes, white peacocks) for sale, but no kittens. Fast forward a few weeks and we finally felt settled enough in our house to get a cat. Our homesickness was settling into our hearts as well and we all needed a pick-me-up.

The first place we checked was in San Pedro Sula (the larger city about an hour away). We had heard there was a pet store in the mall. Navigating the parking and towing our five children through an upscale mall we found the pet store in the corner of the third floor. As we walked in, I realized we would be disappointed. No cats. They had lots of bunnies (which are super popular and often eaten) but no cats. I looked down and instantly laughed out loud. Inside a small cage near the door were two hedgehogs. I had never seen one in person, but they were exactly what I had seen in pictures.

Jason and I, for a moment, considered getting a hedgehog. We took the kids to get ice cream once we realized getting a cat wasn’t going to be an option. As I sat there sharing my sundae with Liana, I Googled, “How to care for a hedgehog.” We left the City Mall with no hedgehog but we had hopes of finding another pet store in town.

Unfortunately there weren’t many options for pet stores. We drove to a couple of places that turned out to be just pet supply stores (no pets). As we began to break it to the children that we would just have to wait until the mall pet store got kittens, I had an idea. What if we called a vet?

So in a moment of last-ditch effort we drove to a veterinarian’s office behind the mall. In the states we knew people often dropped off baby cats and dogs at the vet. It was a whim and we didn’t have any hope. As I sat in the car with the kids while Jason went inside, we all speculated whether they had cats. When he didn’t come back right away, I had a fleeting thought, “Did he get kidnapped?” And then the kids all said, “I bet he found some!” We took a vote. Titus said he thought there was a 40% chance of their being kittens. Jack said 95% there would be kittens. Emmalia said that there was a 100% chance of them having kittens.

Jason came back and said the vet didn’t have any kittens BUT he had a friend who had some. So come back in fifteen minutes and we could see them! We all cheered. As we waited, we decided to drive to the bank to get some cash in case they wanted payment. After returning to the vet’s office, we were told to come back tomorrow by 8AM and there would be kittens to choose from.

After driving around all morning and getting our hopes up, we were a little disappointed. The next day we drove back to San Pedro Sula. Because of traffic, we got there around 8:30AM. As we waited, a woman came out. She was the vet’s sister and she took us to a room where there were not just two kittens, but seven to choose from. I think she was under the impression we wanted several kittens. When we told her we only wanted one she looked a little disappointed.

It turns out she and her brother run the vet office and often “rescue” animals who need physical care. So while we were looking at kittens we noticed a pretty sad looking black cat and Weiner dog. As we let the kids hold the kittens, Jason and I noticed two more cages at the end of the room. When we peeked inside there were two hawks! They were huge. They had been shot and were getting their wings fixed.

After checking them all out we choose our kitten and life is better now. We’ve named her “Princess Peaches and Cream.” Peach for short. To say she is loved is an understatement.

Follow
This error message is only visible to WordPress admins