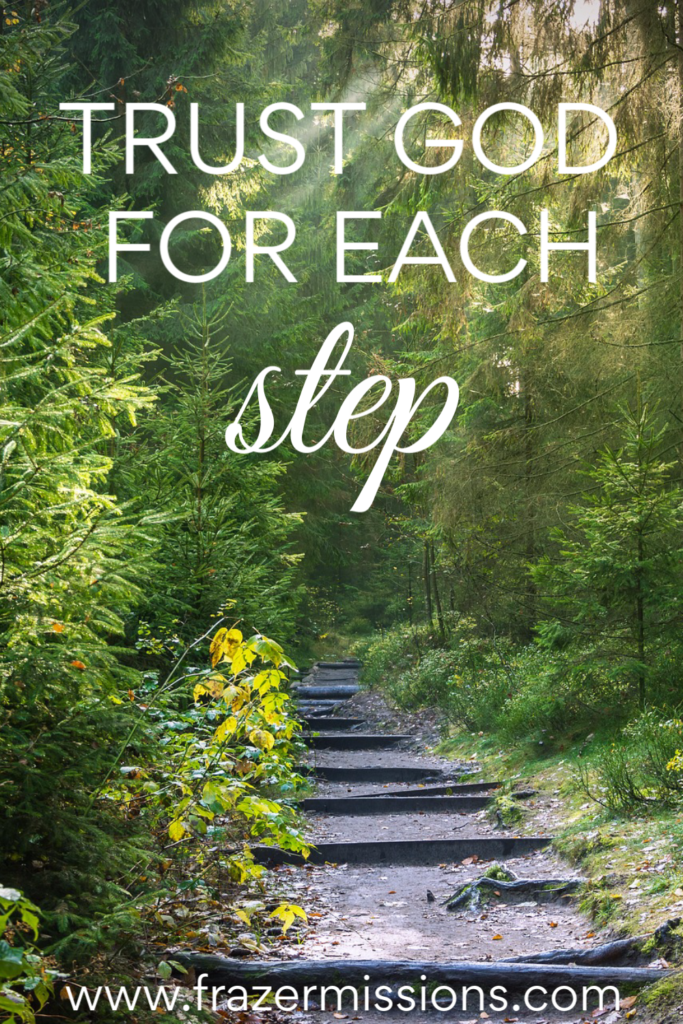 As we move into the next month I’m thinking about days and weeks and months. I’ve started keeping track of how many more days Jason has left at the hospital. The other day I realized I have just a handful of weeks left at our home church. Two months from now we will be officially moving three thousand miles away.

For a girl who has lived her past thirty-some years in the same five-mile radius, this feels big. Some of you would say, yes! It is a big thing. For me, as I process and pray through the emotions swirling around I realize this is just a step. It is big step, but it is not unique to other big steps we’ve taken (and survived).

When Jason and I adopted Liana it was a huge step. We had no idea what we were doing. It turned out to be a very hard and emotional first year home with her. As we prepared to bring home Joel we realized it was a huge step and we had a little more knowledge of what to expect – but it was completely unknown and another hard year with him home.

So as we prepare to take another step in life, and there are hard (painful) goodbyes waiting for us in just two months, we are trusting the same God to get us through the hard parts. You see. Steps are done slowly. I’ll be the first to admit I don’t like walking. Running I enjoyed, but walking not so much. I came across this quote back in 2016 (during what I would later call our dark year):

But it does require the supernatural grace of God to live twenty-four hours of every day as a saint, going through drudgery, and living an ordinary, unnoticed, and ignored existence as a disciple of Jesus. It is ingrained in us that we have to do exceptional things for God— but we do not. We have to be exceptional in the ordinary things of life, and holy on the ordinary streets, among ordinary people— and this is not learned in five minutes. (October 21)

You see, I want to run ahead and have everything figured out before I take the next step. This entire process (and honestly adoption too) has taught me to trust God for each step. I can’t see the entire path. I love what a fellow author said one time: “God gives us a lamp unto our feet, not a football field.” You see, we have enough knowledge, grace, wisdom, and endurance for today’s step. For today’s path we have enough. And I’m not in January yet, but I imagine when January comes I’ll have enough.

Follow
This error message is only visible to WordPress admins